Finding Dory is a 2016 animated film, directed by Andrew Stanton, produced by Pixar and distributed by Walt Disney Pictures.

Finding Dory is the sequel and spin-off of Finding Nemo; Marlin and Nemo are in fact the co-stars of the film. They live new adventures with Dory, this time following the ocean current toward California.

One year after the finding of Nemo, Dory begins to have memories of his family. During a Mr. Ray lesson on the animals migration, Dory has a flashback about his childhood. She decides to go look for her parents, knowing that her short-term memory loss can be a big obstacle to her research. The only thing that she remembers, in fact, is that they lived at the Jewel of Morro Bay in California.

Marlin and Nemo, decided to accompany Dory in her trip. With the help of Crush they ride the ocean current to California. But in California they meet a giant squid that almost eating Nemo. Marlin blames Dory endangering his son, so she decides to return to the surface to seek help, but she is captured by staff members from the Marine Life Institute.

Dory is sent to the quarantine section and tagged. There she meets a grouchy, but useful, octopus named Hank. Hank immediately notices that Dory has a tag which means that she will be sent to a permanent aquarium in Cleveland.

Due to a very traumatic life in the ocean, Hank wants to live in an aquarium instead of being put back into the sea, so he agrees to help Dory in finding her parents in exchange for her tag.

During the trip Dory meets her childhood friend Destiny, a nearsighted whale shark and Bailey, a beluga whale, who believes he has lost his ability to echolocate. Dory learns that the rest of her regal blue tangs species are transferred to Cleveland.

Meanwhile Marlin and Nemo try to save Dory with the help of two sea lions named Fluke and Rudder and a very friendly common loon named Becky who makes them enter into the Institute.

Marlin and Nemo can find Dory in the tubes system, together the three fishes come back to the quarantine section where there are the other regal blue tangs, in order to obtain more information. There they discover that the Dory's parents, when she was sucked into the pipe system of the institute, went to look for her to the quarantine section but they never returned and so they were probably dead.

Hank recovers Dory from the tank, but Marlin and Nemo remain accidentally behind. Immediately after Hank is captured by an employee of the Institute.

Unintentionally Dory falls into the drain and she is alone again in the ocean. Having forgotten why she is there, she began to wander aimlessly, until she finds a path made of shells, at that moment a recommendation of her parents comes back to the her memory, that is, to follow the trail of shells to get home. Dory follows the trail and so can finally regain her parents Jenny and Charlie.

Dory is finally happy with her parents, but immediately after she remembers having to save Marlin and Nemo, who have since ended up in the truck headed to Cleveland. With the help of Destiny and Bailey, Dory manages to reach her two friends, to free them and at the same time persuade Hank to come back with her to live in the ocean.

Once free Marlin, Nemo, Dory, her parents and all their new friends, return to the reef. 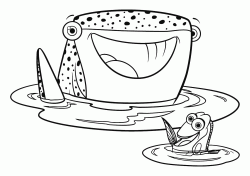 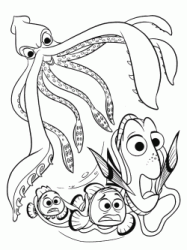 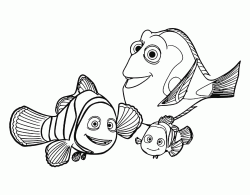 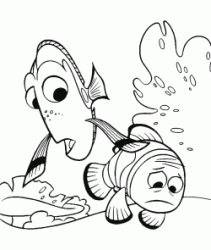 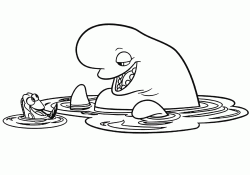 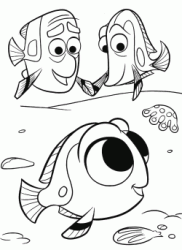 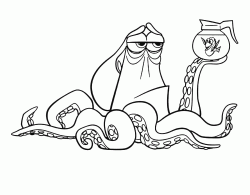 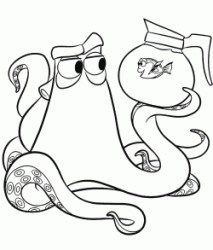 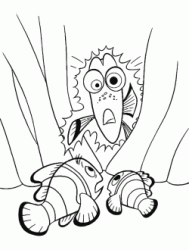 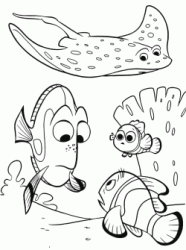 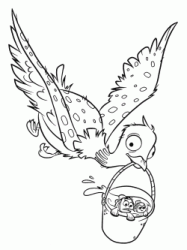 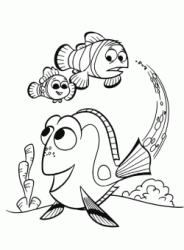 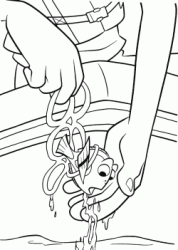 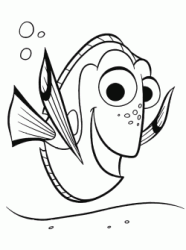 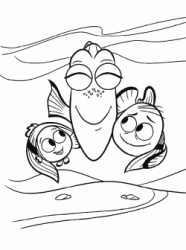 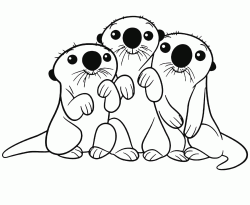 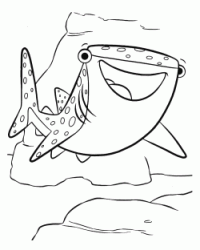 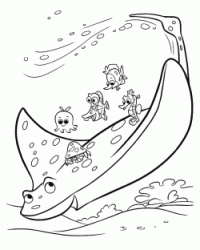 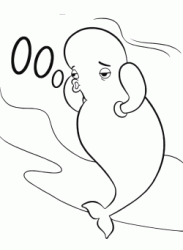 Printable coloring pages of Finding Dory. The regal blue tang Dory and the two clown fishes Marlin and Nemo await you to live together wonderful adventures in the California's ocean.